One handy feature of Wistia is the ability to easily set a video’s thumbnail (or still or poster, if you prefer) to an exact frame.

You open up the Customize panel, seek to the frame you want in the video (for bonus points, use the arrow keys to single frame advance to the exact frame you want), then click Use the current frame, and ta-da: we grab that frame and set it as the video’s thumbnail. 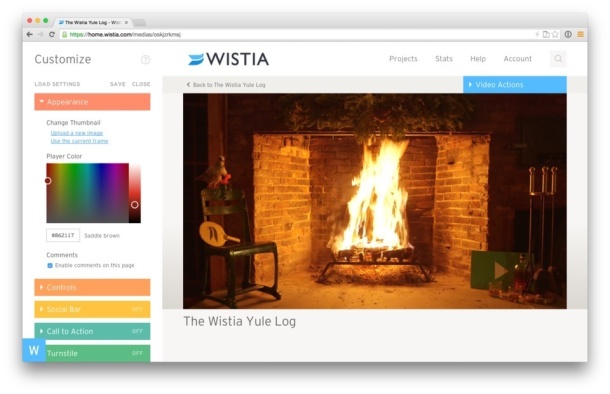 The only problem is that there are cases where that “ta-da” isn’t quite a “ta-da.” Occasionally, it takes us several minutes to process the thumbnail change after you select it. Taaaaaaaa-zzzzzzz.

How Thumbnails Are Made

To understand what’s happening behind the scenes, here’s a bit more context about our system’s architecture.

When you upload a video to Wistia, it’s sent to an internal service called the Bakery. The Bakery handles all of our video ingestion, transcoding, storage, and delivery. The upload gets routed to a cluster of Bakery upload servers at a Rackspace data center outside Chicago. When the upload is complete, we extract a thumbnail from the middle of the video using ffmpeg, a popular open source project that provides tools to manipulate video. Because the file is on the local filesystem, this is a quick operation: it usually takes less than a second.

Now, say you don’t like the thumbnail the system automatically chose for you, and you want to pick your own. In your Wistia account, you pause the video on the frame you want as your thumbnail, and you click “Use the current frame.” Here’s what happens when you click that link:

Great! Now you see the new thumbnail, and all this took only a second or two. Ta-da, for sure!

Here’s where things take a turn for the worse. It’s been a few days since you uploaded your video, you’re back in your Wistia account, and you want to pick a new thumbnail. We have a problem: the video isn’t stored locally on the cluster any more.

Because our upload cluster has limited disk space, some time after you uploaded your video, we shuttled it off to Amazon S3 for long-term storage and removed it from the local disk in the cluster.

This isn’t the end of the world; we just need to do things a bit differently. Here’s what happens when you click “Use the current frame” for a video that’s not stored locally on the cluster:

This works, but it’s not fast. Video files can be big. It’s not uncommon for files to be many hundreds of megabytes or several gigabytes in size. And not only that, but network speeds are only so fast. We typically see speeds in the low 10s of MB/s from S3 to our machines at Rackspace. So let’s say your video file is 1 GB. That means it’s likely going to take between 20 and 50 seconds to download that file.

That’s slow. And it’s especially annoying because from your perspective, nothing’s changed. Why was it really fast to select a thumbnail the first time, and painfully slow the next time? Chances are, because it was so fast the first time, when it took 30 seconds the next time around, you didn’t even wait for it — you assumed something was broken. That’s what I’d assume!

Aside: yes, we can probably get that download speed up from S3 using multithreaded download, but we’re still looking at tens of seconds for multi-gigabyte files. Also, network speeds over the public internet aren’t the most dependable in general, so while this would speed things up, it wouldn’t truly solve the problem.

Luckily, there’s a better way. ffmpeg supports several video input protocols aside from the local filesystem, one of which is http. When I first discovered this, I noticed there was a seekable option. After perusing the source, it looked like ffmpeg was capable of making byte-range requests. This is great. Instead of downloading the whole file to extract a single frame, perhaps ffmpeg will only get the parts it needs.

Testing the behavior is easy enough. Here’s a 36-minute, 1.5 GB video of a yule log (a belated happy holidays!):

Downloading this file from one of our worker boxes took 27 seconds (pretty speedy, actually):

Now let’s grab the thumbnail from 30 minutes into the video we downloaded:

Now let’s try having ffmpeg grab the still directly from the URL:

Wow, the whole thing took less than half a second. That’s over 60 times faster. And that’s with the download speeds that were significantly faster than what we normally observe.

For the extra curious, you can use Wireshark to see what ffmpeg is actually doing: 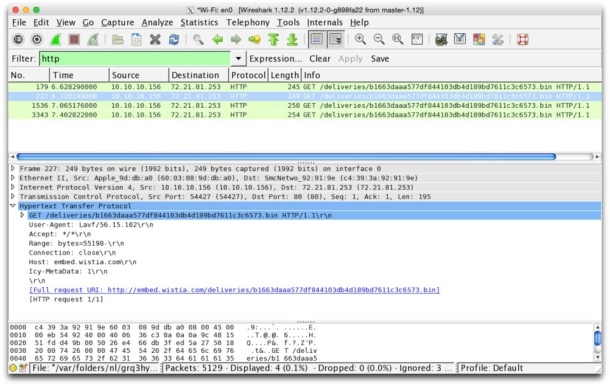 We can see here that ffmpeg makes 4 separate HTTP calls, each for a different byte range. For each call, the start of the range is specified, but the end is not. This is because we don’t know how many bytes we actually need, we know where we want to start reading each time. When we get what we need, we close the connection. Here’s a breakdown of the requests for this file and why ffmpeg is making them:

Aside: I used AtomicParsley to analyze what all these byte offsets correspond to. It’s a handy command line tool that will parse MPEG-4 files and print out the location of all the atoms in the file.

And if you’re curious to know exactly why ffmpeg is making the requests it is, go straight to the source.

After putting this change in production, we’ve seen more than a 5x speed up in thumbnail extraction times for videos that are not stored locally in our cluster. Not too shabby!