A Call to Action is a clickable message, image, or HTML script that appears anywhere in your video, and it lets your viewers know what you want them to do next. 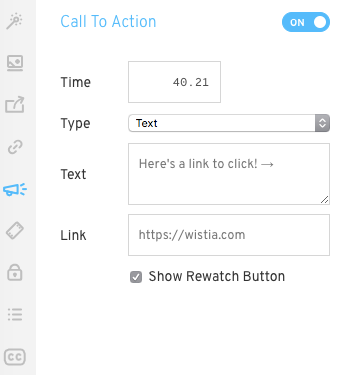 There are three types of Calls to Action:

Note
When adding your link, make sure you include the http:// or https://.

You can build a custom HTML Call to Action and design it to your liking. If you want custom CSS styling we highly recommend using on-page CSS, e.g. adding a block of <style> tags in the head of your webpage and putting the CSS there. If CSS is added directly inside of the HTML CTA in Wistia, it may be ignored or stripped due to security precautions. By including the CSS on your website you can have a lot more flexibility in your design.

It’s possible to use a limited amount of CSS directly within the CTA code, as long as you apply it inline. If you notice some of those styles are not working in your CTA, you may need to embed the video outside of your Wistia account to see them render.

Wistia will strip out JavaScript from your custom CTA in Customize as well, so make sure to stick to HTML (and some basic CSS) when editing the CTA in Wistia. Similar to CSS, you can implement JavaScript on your webpage instead of inside the CTA code. Looking for some inspiration or sample code? Have a look at our HTML CTA examples page.

Note
Since HTML Calls to Action allow for advanced customizations (which could lead viewers away from our stats servers), they won’t collect any Action stats.

Why Can’t I Remove the Skip Button on a CTA?

The logic behind disabling the Skip option is due mostly to the nature of a Call to Action. Since it can appear anywhere in the video it’s sort of fruitless for it to not be skippable, since it blocks the rest of the content from being visible. There’s really no point in having anything after a CTA if someone can’t skip it. The viewer is sort of just stuck there.

For this reason, we’ve made it so that the viewer will always be able to skip a Call to Action. The button will become a Rewatch button if the CTA is placed at the end of the video.