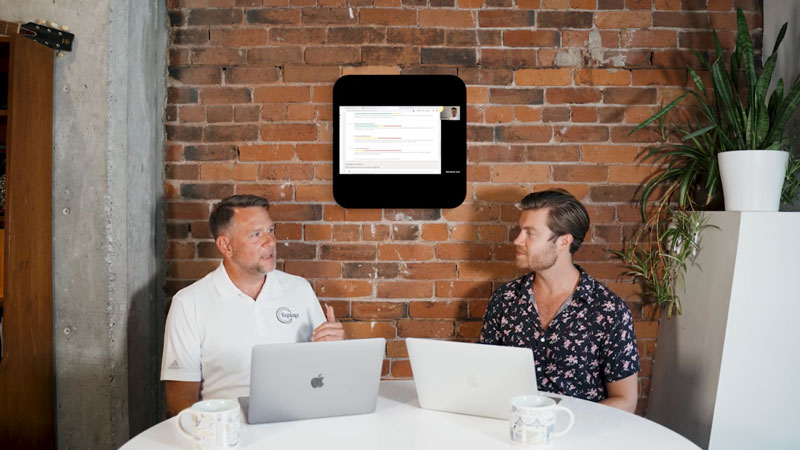 As the Director of Marketing at Sales Hacker, the world’s smartest community of B2B sales professionals, Colin Campbell is focused on finding ways to engage their community of about 170k subscribers. Before in-person productions were largely put on hold due to the global pandemic, we spoke with Colin to hear how Sales Hacker created a video series called Demo-litions to help their audience become better salespeople and resonate with their niche on a deeper level. However, the lessons from their series are still applicable to remote productions and planning for when in-person shoots resume.

Dig in to hear all about Sales Hacker’s strategy, Demo-litions, and why they chose to showcase their content in a Wistia Channel!

Walk us through your top focus areas in your gig as Director of Marketing, and tell us about your favorite part of the job.

Colin: My top focus areas, you’d think, as Director of Marketing, would be making us bigger, but it’s actually making us deeper. What matters to us, and what matters to our audience, is not the size of our community. It’s not how much content we produce. It’s not how long our webinars are. My focus area is — how do I take the people who are already net promoters, and reward them for being net promoters, and do more for them? We’ve got 170,000 subscribers, give or take and I’d be happy keeping 40,000 if they were all really engaged, and their lives were better because of what we’re working on. We’re looking for ways we can get deeper relationships with our net promoters.

My favorite part of my job, which is also my favorite marketing metric, is the number of thank you’s we get. I don’t know about you guys, but I don’t usually like being marketed to as much as I like marketing. So when we do something that has people reaching out to me on LinkedIn and saying, “Thanks for doing that,” that’s the best part of my job because it makes me feel like the work I’m doing actually matters.

Going off this idea of creating deeper connections, is there a process for doing that? How are you listening for what your audience is going to care most about?

Colin: I don’t know if I have a process, but I definitely have a framework. It’s not something I’d sit down and do steps 1, 2, and 3 then I’m done, and then I do it again in six months. It’s an always-on way of thinking about “Where do we double-click? Where do we deepen engagement?”

Have you ever heard of Popsicle moments?

No. Tell us more.

How did the idea for Demo-litions surface?

Colin: In retrospect, it came from the same place of just spending as much time as I can talking to our audience. Nobody asked for Demo-litions, but I was thinking back to my days trying to learn how to hold a good call with a client, and I was shadowing the other people on my team. I realized that looking back, I wish I had understood more of the science of what makes a good call. I don’t think that’s something a lot of salespeople get either.

So the idea for Demo-litions came from a place of just wanting to help, wanting to help our audience do something better, and serving a need that nobody else is serving right now. I think we’re in a unique position to do it because not many people are willing to make their sales demos public. But we were able to convince several people to do it.

“So the idea for Demo-litions came from a place of just wanting to help, wanting to help our audience do something better, and serving a need that nobody else is serving right now.”

What was your thought process about using Wistia in tandem with YouTube, and how has your first 30 days been?

Tell us about what the qualitative feedback has been like. Does it feel different than other types of content that you put out?

Colin: While it’s not dozens and dozens of thank you’s, notes come through all the time where they’re thanking me, or Scott and saying things like “This is such a unique idea. I never would have thought to do this, and I didn’t think I needed it, but now I’m realizing how helpful it is.” Or it could be something as simple as “Thanks for going to the trouble to make these videos. Please keep it up.” Even just a handful of those is huge to us and lets us know we’re on the right track.

In your first 30 days of using Channels for Demo-litions, what other things stuck out to you about stats that have helped inform your decision-making at this point?

Colin: We’ve got a Google Doc that’s four pages long of lessons that we’ve learned just from watching season 1 in the last 30 days. Whenever anybody tells me they like the series, I ask them, “What’s one thing you would change to make it better? Their response goes in the Doc. Scott and Dave, the hosts of Demo-litions, do the same thing. Then looking at the analytics in Wistia, we’ve learned that we need a little bit more show structure. Right now we kind of just start sprinting at minute 2 and go for 25 minutes. So we’re adding segments to create more narrative structure.

Wistia’s made it pretty obvious and easy to implement changes–little editing changes–that’ll make a big difference in the viewing experience for the next season.

“Wistia’s made it pretty obvious and easy to implement changes–little editing changes–that’ll make a big difference in the viewing experience for the next season.”

What are the lessons that you’re learning that you think you wish you’d known when you started?

Colin: I think the thing I’ve heard most is that if we had just bought some cheap lavalier mics we’d have better audio on early episodes, since it’s a little echoey. We found a lot of things wrong with what we did in shooting season 1, but I’m comfortable having done those things wrong because I think if we waited to know how not to make those mistakes, it would’ve just taken us forever. I’m really glad we started and made a bunch of mistakes. We’ve learned a lot about how we want camera angles to look, how we should set up the set, the sound, the structure of the episodes, even how we promote the episodes. But I don’t think we would have learned any of those lessons if we didn’t just dive in.

“We’ve learned a lot about how we want camera angles to look, how we should set up the set, the sound, the structure of the episodes, even how we promote the episodes. But I don’t think we would have learned any of those lessons if we didn’t just dive in.”

How would you compare using Channels for Demo-litions to building something similar in-house?

“If we wanted to create a binge-able experience anything even remotely close to Wistia with our own development or design resources, it just straight up wouldn’t have happened.”

Did you ever feel that you had to sell or pitch this to senior management?

Colin: So basically, Max, he’s the founder of Sales Hacker, said something like “I think it’s a cool idea. If Scott wants to do it and Dave wants to do it, let them do it.” But there wasn’t any, “Yeah, absolutely, this is the next big thing for us!” So I’ve had to be a champion for it. Here’s what I think it comes down to. There’s marketers who need ROI justification for everything, and then marketers who are willing to try crazier stuff. Do you think you have more room to grow, or to shrink? More to lose, or more to gain? If you have an abundance mindset, you think you have more to gain than you have to lose. From that lens, the mentality is to be an early adopter anywhere you see white space. It’s almost a cliche at this point, but if you’re a B2B marketer, copy B2C people. They’ve got it nailed.

What does the future of shows look like for Sales Hacker?

Colin: What I’d like to see happen is that this series continues to grow in popularity. Maybe we hit an inflection point at some point, and it either skyrockets and we find a way to tweak the structure, or it just takes off. And maybe we hit an inflection point where it plateaus. But what I expect to happen is at some point, it will become obvious what the next series will be that we’ll create. I mean, this is created for a very specific person — someone who’s giving demos, so probably an Account Executive.

We’ve got a podcast for sales leaders. There are a whole lot of other people who could use our help in the B2B sales world. I’m not going to force it. I don’t have a specific plan. But I think when an opportunity to help in our list of popsicle moments presents itself, a new series is absolutely on the table, especially after we hit that spinning flywheel with Demo-litions.