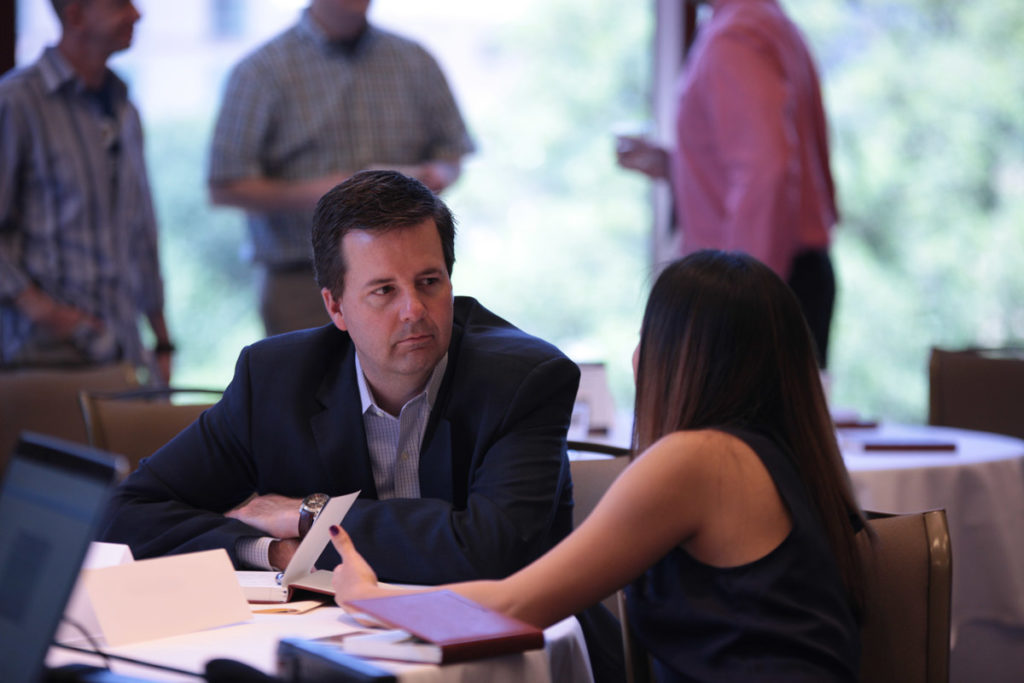 Quickly communicating the compelling value of a software solution makes the life of both sales and marketing professionals twice as challenging. Taylor Magargal and Iris Maslow of PrecisionLender know this problem all too well. Taylor, who works in Marketing Operations, and Iris, who leads the Digital Marketing strategy at PrecisionLender, are tasked with a variety of responsibilities, but at the end of the day their main job is to drum up new opportunities to grow the business.

When I asked Iris to describe what PrecisionLender does, she said: “We provide a pricing and profitability negotiation tool for lenders at high-performing banks, who need to handcraft deals based on customers’ needs in real-time, ultimately giving them the ability to win more business and strengthen relationships.”

Just reading this seems complicated, right? Which brings us to our next point …

PrecisionLender sells a valuable service to assist bankers, but easily and quickly communicating the compelling value of their solution was identified as a big challenge by the marketing team.

To address this challenge, Iris and her team began using video to tell the PrecisionLender story — at first working solely with a third party, and eventually setting up their own studio in-house to create some of their video content internally. PrecisionLender creates a variety of videos to help with marketing and sales, promote the events they attend, tell their story, and showcase their culture in a humanized way.

“The solution we offer is difficult to explain succinctly, and most of our marketing team doesn’t have a background in banking,” says Iris. “Using video gave us the opportunity to let our banker clients tell the story, which led to an obvious and genuine interpretation of what we do. With written copy that level of authenticity wasn’t possible. Video is by far the best way to communicate what we do and why we feel so strongly about it.”

After perfecting the use of video, Taylor realized they were facing an even larger dilemma: the ability to attribute sales to video.

“Before using Wistia, we thought certain leads weren’t taking any action because they weren’t taking any identifying actions aside from just browsing,” says Taylor. “We were putting so much money and time into production and editing, releasing our videos into the wild, but we were unsure of who was watching them and how they tied to revenue.”

“We were putting so much money and time into production and editing, releasing our videos into the wild, but we were unsure of who was watching them and how they tied to revenue.”

Shortly after implementing Wistia, and taking things a step further with the Wistia and Pardot connector, Taylor realized these “just browsing” leads were more engaged than she originally suspected.

“Even if they weren’t clicking, downloading, or immediately converting, we could see they took the time to watch a 30-minute recording of one of our webinars,” Taylor said. “Watching one of these videos is a pretty significant chunk of time and shows escalating behavior and investment in our solution and company."

"The integration with Pardot has allowed us to work this into our marketing qualified definition, score leads, add them to workflows, and alert sales when this kind of behavior is occurring. It’s been a real game-changer for us.”

The Wistia and Pardot connection has revamped their sales process. Now they host all of their webinars on Wistia, embed them on their website, promote hype around them, and then use the Pardot integration to score and alert sales when leads have watched a significant portion of a webinar recording.

Taylor and Iris have also begun to collect new leads by using a Turnstile email collector in their product overview video. “We knew a lot of people were watching it, and we wanted to do something about that since a lot of these viewers hadn’t engaged with us in any other way,” says Taylor. “We came across Wistia’s Turnstile email collector, and when we found out the Pardot connection could be made, we set up a workflow to add these new Turnstile leads to a list and subscribe them to a regular series of content related to specific and technical information that they’re likely to be interested in due to their viewing behavior.”

Having access to video analytics within Pardot has also helped their sales to understand their customers on a deeper level and build stronger relationships.

“Understanding what videos have been viewed and having the heatmaps to show what sections are being watched and re-watched has allowed our client development managers to have more relevant conversations, and ultimately build stronger relationships with their accounts,” says Iris. “Being able to see exactly where people are drawn to in your video is extremely important and Wistia allows us to do this.”

“Being able to see exactly where people are drawn to in your video is extremely important and Wistia allows us to do this.”

Now that the integration has been configured and the results are coming in, Taylor and Iris are thrilled to have a new way of collecting data and nurturing leads. “The Wistia and Pardot connection has really made video a trackable channel for marketing and sales,” says Taylor.

“Piping video data into Pardot has definitely helped us attribute many more conversions to video; before we were just attributing these to organic search,” says Taylor. “We now have a better understanding of who our audience is and what they’re interested in, so if they only watch videos we can continue to feed them video content.”

Perhaps most notably, 100% of leads who requested a demo after watching the solution demo video led to the client development managers opening an opportunity. Comparatively, only 39% of leads that requested demos without seeing the video led to sales opportunities.

“Perhaps most notably, 100% of leads who requested a demo after watching the solution demo video led to the client development managers opening an opportunity.”

Taylor also recalled several stories of when these video opportunities led to a direct conversion. For instance, there was a lead who visited their website, watched the entire product video, and then requested a demo. Three days later an opportunity was opened. A month later, that same lead watched another video on their integration capabilities. Shortly after, the opportunity was won, which occurred in about half the time the average opportunity takes to close.

“It’s been really cool to see our sales team use this data when reaching out to prospects,” says Taylor. “They’ve found the data to be a great jumping off point when calling a lead because they know exactly how much knowledge the prospect has based on the parts of the video they’ve watched. We treasure each opportunity to speak with a prospect and we don’t want to waste their time by giving overviews of something that individual already knows from watching our videos. Our sales team can just jump into what the prospective client’s specific challenges are. They’ve all become very invested in video data to help them close deals.”