When we first started Wistia, we didn’t have much money.

Chris and I worked and lived in a 6-person house in Cambridge. Everyone chipped in for our “meal plan,” which worked out well for us because we were home for 3 meals a day, and they were only around for the occasional dinner. Thanks for subsidizing Wistia, you guys!

When our business began to grow, catered meals became a treat every once in a while. We saw them as a tool to bring people together and encourage conversation. Fast forward a few years, and we were holding weekly “family” lunches (buffets of sandwich fixings).

Within the past year, we began ordering catered lunches on days when candidates were interviewing for a full morning or afternoon. We figured it was a nice informal way for team members to meet potential hires and vice versa. With all the hiring we’ve been doing, there have been occasional weeks when we’ve come dangerously close to a catered meal every day! It snuck up on us. 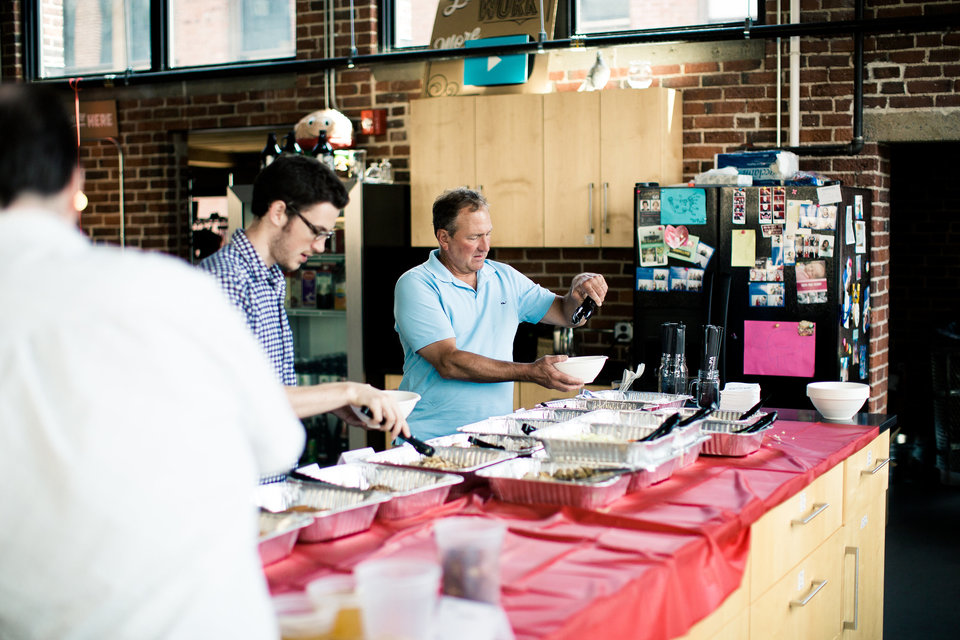 We’re not alone. It’s becoming common practice among tech companies to provide catered lunches (or all meals) for their employees.

Unfortunately, the driving force behind this catered lunches trend is largely economic. By spending what feels like a nominal amount compared to people’s effective hourly wage, you can get more work out of your employees. Free dinners for people who stay past 7? Now you’re really making money. And you’re incentivizing people to stay late.

Catering every meal might seem like an ideal way to optimize efficiency, but this practice and frame of mind have some serious long-term (and short-term) costs.

At Wistia, we’ve had plenty of catered lunches, but their purpose was never to squeeze productivity out of our team. In fact, most of these meals actually make us less productive in the short term, but we’re willing to accept that loss if it means building a company of people who care more about each other and our growing community.

Why catered meals can be nice — sometimes

Still, even if our intentions are well-meaning, catering every lunch means missing out on some of my favorite aspects of our company’s culture.

On the days when we don’t have catered lunch at Wistia, small groups of people go out to grab lunch and get to know each other better. We have conversations in new contexts that we might not have had in a full company setting. It’s more intimate. And who knows what crazy stuff will happen out there in the wild that will bond coworkers for life!

People who made their own lunches hang out in the kitchen and bond over what they cooked last night.

But most importantly, we are responsible for ourselves. We find food, we clean up — we have the opportunity to act as adults and combat a harmful culture of entitlement.

Being willing to chip in and help with cleanup work for the good of the team, having nothing that’s “beneath” you — those are both really important values. The same people who’d grab your dish when you’re busy and clean it for you are the people who will jump into chat late at night when there’s an issue affecting customers, even though it’s not any of their code that broke.

Like any business decision, if you’re thinking about catering lunch for your team, consider your intentions and weigh the potential costs. I, for one, will be keeping a critical eye on Wistia’s meal plan.