When we were first getting started, Wistia (despite being a video company) did not make videos. We didn’t just avoid making videos. We were terrified of making videos. We thought that making videos would expose us for who we really were: four scared people sitting above a framing store trying to figure out how to get traction and not give away the fact that we had no idea what we were doing.

We wanted to start 2014 by sharing the story of how we got where we are with video — plus the stories of our friends at Zendesk, Moz, and BambooHR — in hopes of helping others get over the same terror.

The early days of video at Wistia ←

We made our first video in 2008. To get you in the spirit, this is what our website looked like back then: 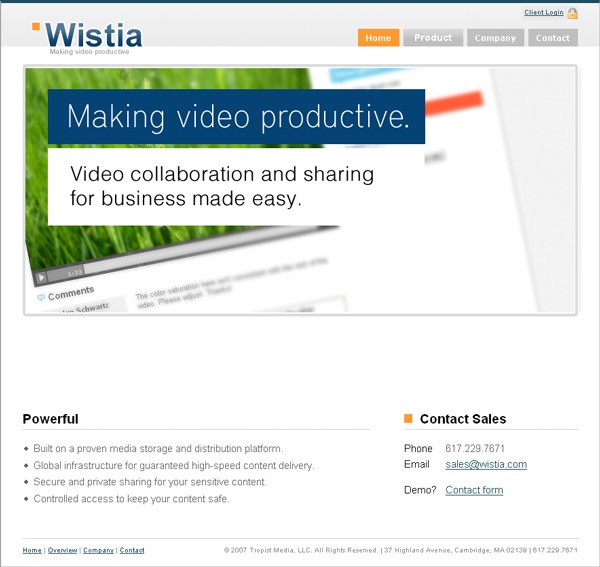 The early days: our first steps

Our first videos were not front page videos, product launches, or testimonials. They were videos made out of necessity.

In the early days of Wistia, we did demo after demo after demo by phone. Our demos improved with practice, and more people started to actually try the product. This was amazing! However, it became clear that if we had a solid demo video on the website, we could make this process scaleable across more visitors.

We had a few requirements for our first videos: we wanted viewers to get a great demo of the product and we wanted show them that we were a legitimate company. The latter consideration led to a simple conclusion: we should definitely not be on camera.

To accomplish this legitimate, informative style of video, we decided to make a screencast. We would rely on text for the high-level points and record our interface directly using a screencasting tool, Screenflow.

Here was one of the earliest screencasts we made. You’ll notice my highly-trained narration throughout.

This screencast was clearly crappy. It did not make us look like a “legit, successful company.” It definitely didn’t add an extreme air of confidence. But it worked! Calls started coming in from people who actually understood what the product was. This was a game changer. Our calls were more productive and more fruitful.

As we became more sold on video and screencasting, we made more and more videos to explain parts of our product. Here’s a video we made to highlight our heatmapping:

And here’s a video we made to highlight how sold we were on screencasting:

Getting our footing: video adolescence

The big transition to jumping on screen happened by accident. At the time, there were six of us. Jeff, our director of customer happiness, had just joined us, and he said he had a friend we should meet, Chris Lavigne. Lavigne made videos. He visited the office and started shooting a video of everyone on the team. We didn’t have a plan regarding what the video was for; we were mostly just doing work while Lavigne shot:

I was really proud of that video. It made us look like a real company in a very different way than our screencasts ever did. We couldn’t help but add it to our company page.

After seeing how people responded to that first live action video, we were sold. We started by making new front page videos, launch videos, and a whole host of other types of videos, with Lavigne’s help and lots of practice scripting, concepting, and beyond (he’s now a full time member of the team). Today, the vast majority of the videos you see from us, feature us! There are lots of people on camera, it’s pretty clear how big the company is, and it’s even clear where and how we work. All the things we were afraid to share are the very things we strive to share today.

Instead of starting out making high level front page and feature launch videos, find opportunities where you can stretch your creative muscles before investing more deeply. Great places for first videos might include an addition to a blog post, your documentation, landing pages, and support.

Get your feet wet in support.

How many questions or issues do you run across on a daily basis are more easily explained in person than by email or phone? These kinds of questions are perfect fodder for support videos. These videos can be an amazing place to start because the trade off between the time people spend watching your videos and the time you spend supporting specific tasks can be very real.

Make screencasts of all the hyper-specific support issues you can find. You’ll gain confidence in your editing, pacing, and scripting. And of course, you’ll help scale yourselves better than before. Learn more about making help videos in the Learning Center.

Let people connect with the real you.

Embrace transparency and authenticity, but don’t put too much pressure on yourself to be flawlessly professional or wildly entertaining. Video is most powerful when viewers start to feel like they know you personally, so be yourself whenever possible and try to make videos about the things that excite you individually or as a company.

We got a new ping-pong table two years ago and we were pumped about it, so we made this video:

We’ve learned a lot about video over the last few years, and we’re still learning more with every video we create!

The evolution of Zendesk’s product videos ←

Both these videos were made to be the most basic software video there is: a product video showcasing what Zendesk does. Zendesk product video, fall 2012.

The first one was made in the fall of 2012, the newer one released in October of 2013. In between, video at Zendesk developed at a quick pace, most notably growing from one person (me) to three people (me, Kevin, and John).

Three lessons stand out to us when we watch these videos back to back:

Show a flow of experience rather than just a slideshow of features.

The first video just lists out some things Zendesk does for you. You get to see them in action, which is nice I guess, but the viewer could easily get this same information from a webpage with some animations. With video, we want to present a fluid experience for the viewer and describe our product as a fluid experience. One thing should lead to another in video. We want to show you the story of what our product does, not just tell you what it is.

Focus on people, even when you are focusing on software.

In the first video, the software is the protagonist. Software is usually a pretty crappy protagonist - it has no desire, no problems, no inherent humor. It is something to be used. (Exceptions to this are HAL from 2001 and whatever Scarlett’s Johansson’s voice is called in Her.) We want to show Zendesk in relation to the people it serves and helps. In the second video, we showed how each of our main user types is tied together through the software. It’s not an emotional, deep story, but it is a human story. That’s nice, we think. Especially within the world of software videos.

Build your style off yourself.

We are big fans of mining inspiration from a wide variety of sources, but we want the videos to feel like us. The first one does not. While it does the job, there wasn’t much creative thinking about what it should feel like. In fact, it was pretty much cribbed entirely from the Squarespace explainer video (which is totally great and fits Squarespace’s brand). The second one is a development of our in-product tutorial videos - it starts with that and then pulls inspiration from elsewhere. I don’t think is a hard and fast rule, but it is a good practice. Start with what you have made previously and evolve from there.

Get a small plastic lion and make sure it is in every video you make.

We cannot emphasize this enough.

The beginnings of Moz’s Whiteboard Fridays ←

Elijah can probably help explain what we changed to make things better at Moz, but in the old days, we used the on-camera mic, we had zooming and angle changes, and didn’t do any correction in post. I used the zebra stripes before recording but that was it! It wasn’t the best …  =)

Moz’s Whiteboard Friday, Fall 2011 If I could go back in time for 30 seconds to give advice, based on my experiences at Moz, before the very first Whiteboard Friday, it would be the following. “Don’t skimp on microphones, get a Sennheiser G3. Don’t zoom in to show detail during single take videos, viewers hate it. No, I don’t know why. Set up one room as a studio so you can control audio and light. Buy better lights and cameras when you can, but as long as the content is quality, people will keep watching.” I would then point at whoever I’m talking to, and say, “It’s all up to you, Jebediah!” as I disappear into the ether. Elijah Tiegs, Visual Communications Wizard, Moz (@thinkyfish)

How BambooHR made video a higher priority ←

Video hasn’t always been a high priority for us at BambooHR. Most of our first videos were shot with my personal camera on a cheap white screen we bought off Amazon. I used to just press record then hop into place and spout off the script. Then I would grab a couple other people for some B-roll shots, but it was all pretty basic.

Looking back, I realize video has played a significant role in defining who we are as a company. It’s become a priority as well. We’ve invested in good equipment, hired another video guy, and even built campaigns around certain pieces of content.

It’s been a lot fun, and we’ve definitely learned some things along the way. Here are just a few:

1. A bunch of technical stuff.

There have been a lot of basics to cover with lights, mics, and lenses, but something I’ve really enjoyed is a preset you can download for the Canon 5D called Cinestyle. It shows up as a picture style in the menu and is designed to give you a little more dynamic image to work with in post-production. I love it.

Audiences are smart and don’t need to be spoon-fed every little detail. They also don’t need to know the product inside and out after watching one video. They just need to feel a positive emotional connection to it, and cramming too much information in just makes it boring.

3. There are internal side effects to video.

I think video has created a sense of team pride. We always get co-workers involved, so it’s fun for everyone to see each other on screen. When Matt and I finish an edit, everyone piles into our room to watch and then afterwards we all hit the social networks.

No one wants to spam friends and family with a bunch of work stuff, but I think people like being a part of the fun and aren’t ashamed to say it.

It’s also helped a ton with recruiting. We get a lot of applicants who come in for interviews and say, “Hey, you were in that video. I loved it.” We finally took the hint and recently made a video specifically for our careers page. So far, it’s been great. We’re already hearing, “I saw your video, and it made me want to apply!”

How have your videos evolved over time? We’d love to see more of your early video efforts in the comments and hear about some of the lessons others have learned from the process!