Developing a strong brand has become more important than ever in recent years. With so much competition online, it can be really hard for businesses big and small to stand out. That’s why investing in your brand is so important — a successful, memorable brand can be leaned on for years to come. Here at Wistia, we’ve found that one of the most effective ways to set yourself apart from your competitors and build a well-loved brand is by creating binge-worthy content. In other words, content that provides enough value to viewers that they can’t help but want to consume more of it.

We recently did just that with the creation of our latest video series, Brandwagon. We saw such success last year with our docuseries, One, Ten, One Hundred, that we knew wanted to keep investing in the creation of episodic video content. And something we did for One, Ten, One Hundred that we knew we’d wanted to repeat for Brandwagon was creating a sub-brand to go along with it!

In this post, we’ll dig into how we landed on the sub-brand for Brandwagon and why it’s such an important part of any video series. But first, let’s get into what it really means to have one (or multiple!) sub-brands. 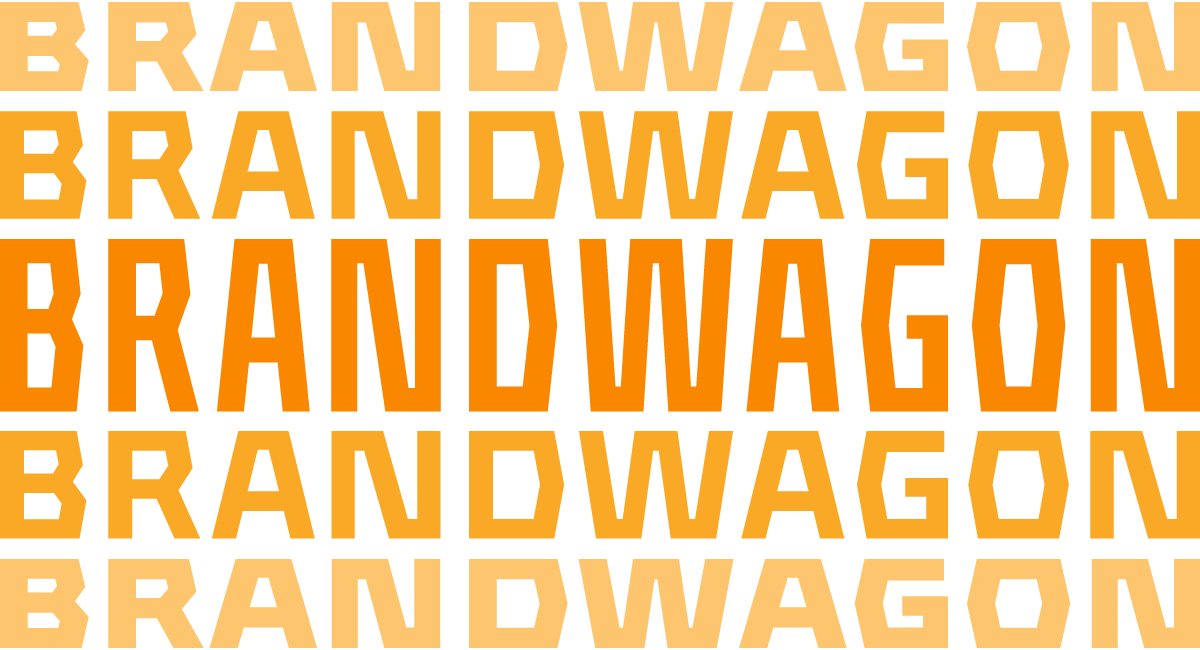 What is a sub-brand?

To put it simply, a sub-brand falls under the umbrella of your parent brand and is differentiated by some distinguishable values and qualities. It’s very common for consumer products to delve into the world of sub-branding — just think of companies like Procter and Gamble, Coca Cola, and Unilever — all of these brands all have a number of sub-brands housed within them. For B2B companies, though, the art of the sub-brand has yet to emerge as the norm. When you start to think about the content you create as an actual “product” your business offers, however, it starts to make a lot more sense. For example, if you create several series for your brand, you’ll probably want each one to have their own unique sub-brand so you can promote them separately to their own distinct niche audiences.

When creating the sub-brand for Brandwagon, we made sure to consider the following factors before landing on a solid concept and direction for the sub-brand. The next time you set out to create a sub-brand for your video series (or documentary, podcast, or hard-cover book — you name it!), we suggest you ask yourselves the following questions, too:

Answers to these questions should help you land on the right direction for your sub-brand while informing other stylistic choices you make throughout your series. Now, let’s pull out our microscopes and zoom in on our own process for creating the Brandwagon sub-brand so you can get a better idea of what this process is actually like in reality!

“Answers to these questions should help you land on the right direction for your sub-brand while informing other stylistic choices you make throughout your series.”

How we created the sub-brand for Brandwagon

We knew that investing in the creation of a sub-brand for Brandwagon would be time well spent, so we looped in Davey, a brand designer on our team, right from the start. We sat down with him and asked a few questions about the whole process from start to finish, so without further adieu, let’s kick it over to Davey and get the inside scoop!

How did you start thinking about the creation of this sub-brand? What inspired some of the decisions you made throughout the process?

Davey: The show Brandwagon is all about letting people know how accessible good marketing can be, so I wanted the sub-brand to reflect that. We wanted Brandwagon to feel familiar and somewhat nostalgic, but also tell viewers “you can do this too!.” So, I wanted to create a sense of attainability, but also give a lot of visual tools. I chose two fonts, one with hard edges that almost looked like it could have been pulled out of paper, to give a scrappy feel, and another that felt like something you’d see on a vintage talk show. And since we wanted Brandwagon to feel different, but still under the Wisita umbrella, we stuck with the colors Wistia already uses in their branding.

Tell us about the miniature set. What did executing on that vision look like in reality?

Davey: I really just thought it would be cool, so I went for it. It was one of those projects that made me think, “Wow, this could be really great, or really bad." Everything was made by hand, from sourcing the materials with the help of Holly, another designer, to gluing the legs of the chair together. Then I worked with Stephen, one of our video producers, to execute on the filming of it. He had this micro lens that really changed everything. It was super long and small, but had a wide field of vision, which let us get the close up shots you see in the intro.

How did you make sure Brandwagon still felt aligned with Wistia’s overall brand?

Davey: I wanted to make sure Brandwagon felt distinct, but still cohesive with the brand we’ve already established with Wistia. So, like I said, I used the same brand colors and chose a condensed typeface, similar to what we did for One, Ten, One Hundred. So even though we never explicitly connected the two brands, if you are only somewhat familiar Wistia, Brandwagon shouldn’t feel like that much of a departure. 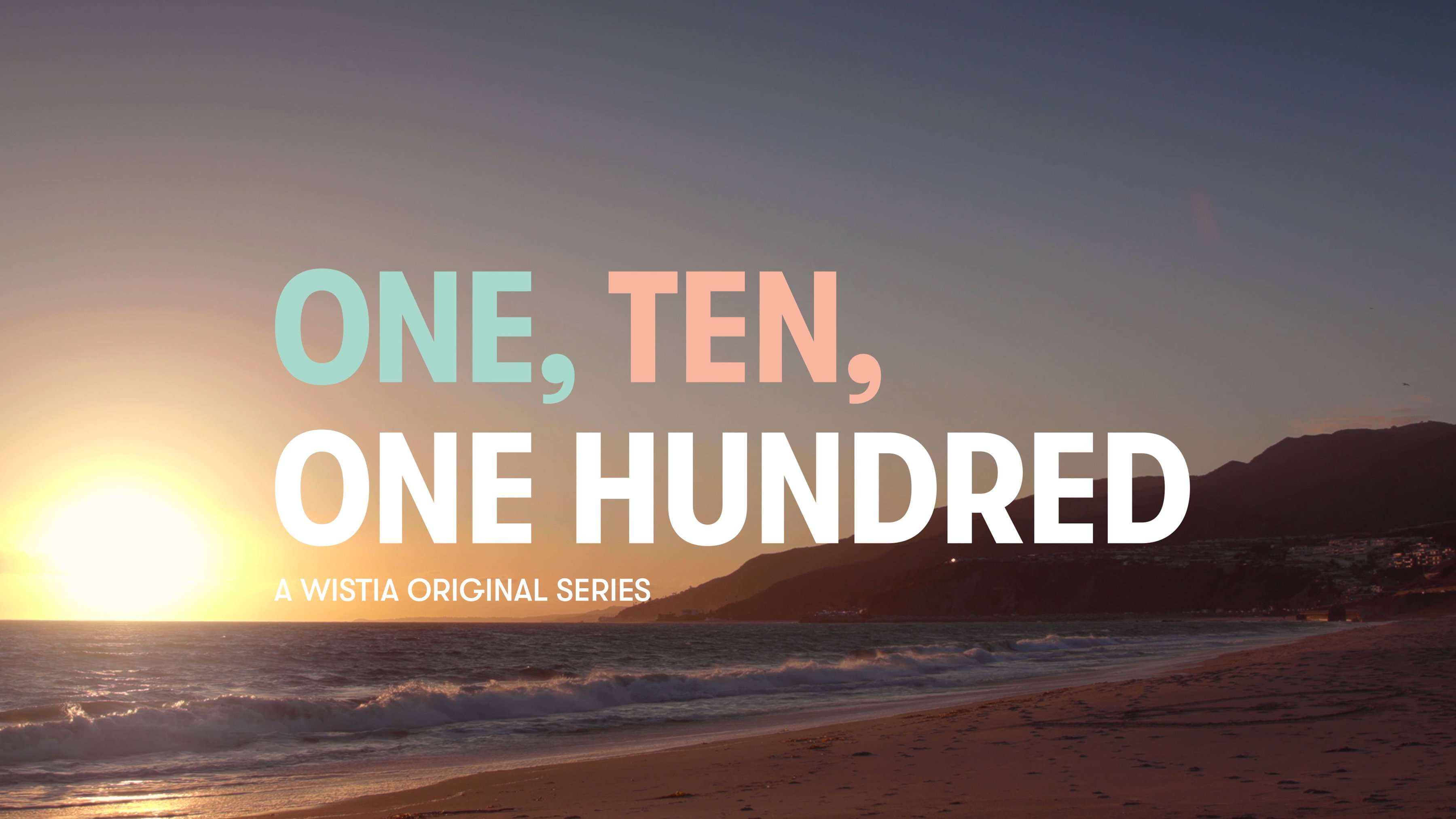 What advice do you have for someone making a sub-brand for their video series?

Davey: The first thing I’d say is to figure out how much you want the sub-brand to align with your parent brand and your overall strategy for releasing your shows. Start with the brand your company already has and use that to inspire the sub-brand for your video series. If you have multiple shows that you want to make look distinct from one another, then sub-branding is the way to go. Making a sub-brand can be really fun and is a great place to experiment with creativity. Try things out on social media and see what works. If it sticks, then that’s great! If it doesn’t, then at least you learned something along the way and can mix things up for next time.

Why branding matters for video series

We recently learned a lot about the importance of creating sub-brands from Dan Kenary, the CEO and Co-Founder of Harpoon Brewing, on our most recent episode of Brandwagon. He mentioned that Harpoon has created a number of sub-brands over the years in order to broaden their appeal. When Kenary started the business, he was committed to diversifying the beer market in the US, but once the competition caught up, it became clear they needed to expand the variety of the beer they offered.

Instead of creating beers under the Harpoon parent brand, they decided to create sub-brands for their different varieties and products. In doing so, they were able to expand their potential audience and appeal to a wider array of folks while still benefiting the overall Harpoon brand. Hear more from Dan on this below!

This rationale can also be applied to the video series you create at your business. For one, having a sub-brand can help expand your content’s reach. With Brandwagon, we had a pretty good feeling that a lot of people would be eager to learn about how to build a better brand — people that existed outside of our current database.

In order to appeal to that new audience, we knew creating a sub-brand that could hold its own and be visually appealing amongst all the other content that exists out there today would help us in that fight. By creating a sub-brand for Brandwagon, we were able to represent the show in a way that might entice folks who have never heard of Wistia before, but who could be interested in watching our content.

“By creating a sub-brand forBrandwagon, we were able to represent the show in a way that might entice folks who have never heard of Wistia before, but who could be interested in watching our content.”

Not only does a sub-brand help expand your reach, but it also allows you to highlight your company’s creativity. By default, creating a video series for your company will make your commitment to creativity apparent. But why stop there? If you’re going to create a video series, go big or go home! After all, our brains are hard-wired to be drawn to novel creative experiences. Making a sub-brand for your video series does take extra effort, but it gives your promotional efforts the chance to stand out in a cluttered social media feed.

Go forth and create

From choosing a name to the colors you use there’s always a lot to consider when creating a sub-brand for your next video series. But no matter which direction you take, it’s important to always stay creative. Creative thinking is what drives any successful business and has helped us make some of our most important decisions to date. So start there and see where it takes you! No matter where you end up, chances are, you’ll learn a lot along the way. Already thinking of ways to expand your brand? Let us know in the comments below!

The talk show, but for marketers is here! Hop in and come along for the ride as we uncover what’s working in the world of modern marketing