Allow me to introduce you to Harper. He’s a proud member of our Customer Happiness team.

Getting started with video

Prior to joining Wistia, Harper worked as a freelance crew member on indie film shoots in Rhode Island. “It was for a totally different audience, and we were using different technology, but I definitely learned the value of lighting,” he says.

When he arrived at Wistia, he was excited to put his passion for video to use. “When I first started making videos for customers, it used to take me between 15–20 minutes,” Harper explained. “I would do multiple takes to get it just right. I accepted this as a reality, and I knew based on the responses I was receiving that it was worth it.”

Since Wistia launched Soapbox back in June of 2017, Harper’s video-creation strategy has certainly evolved. One of the reasons why we created Soapbox was to make it eaiser for folks to create these delightful videos — we knew based on the impact that were having with customers that it was worth it. We also knew that to make a great presentation video, compelling visual imagery was key, but to make a memorable connection, you need … well, you! That’s why Soapbox was built to make both you and your content look amazing.

After getting in some practice, Harper said, “Now I’m much more comfortable being on camera, and it takes way less time,” he says. These days, his average production time is around 5 minutes, but it varies depending on the question he’s answering.

“Now I’m much more comfortable being on camera, and it takes way less time.”

And when it comes to recording videos with your webcam, confidence is key! Here at Wistia, we believe that the best videos showcase people’s most authentic selves — even if that means using filler words like “um” or “uh.” So, take a deep breath and go for it!

With multiple videos under his belt, he feels confident helping others produce better 1-to-1 videos. His top 3 pieces of advice are:

When it’s a quick 1-to-1 video, Harper never writes a script. He just says whatever feels natural. When you use Soapbox, our free webcam and screen-recording tool, you can easily create a great video with your screen, webcam, or both! This unique split-screen view can help transform your messge into a more engaging and effective one.

When it’s more of an educational, static resource video that he can use with multiple customers, he writes out some notes to keep him on track.

“I made this video explaining embed links that’s about 6 minutes long,” he explains. “For that one, I wrote a rough outline to keep my explanation concise and organized.”

Harper works from home 3 days out of the week, and when he first started at Wistia, he used his laptop camera and a desk lamp to record his videos in his home office.

Thanks to a small investment (~$200) in his home studio, he began making more polished custom videos:

His home setup now includes the following (he graduated from a desk lamp to a camera light since recording that test video above): 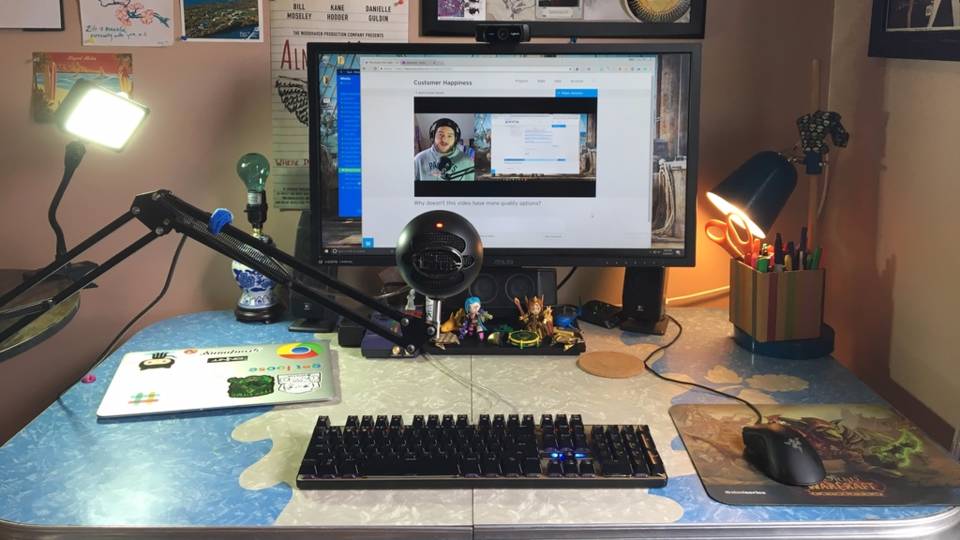 "When it comes to communicating technical concepts or processes, videos are the best,” says Harper. “Especially when I see that a customer doesn’t have a lot of confidence regarding the technical side of an issue, I like to show them exactly what they need to do."

With a mix of personal “talking head” shots and screencasts with voiceovers, Harper assuages fears and clarifies steps.

“After watching the video, they usually realize that it’s not as complicated as they thought,” he says.

“Even if I can explain something clearly with words, it’s totally different to be able to show someone how few steps it takes to get from point A to point B. Realistically, eyes will gloss over a wall of text. Video is a much better way to communicate a technical answer in a clear and engaging way.”

“Even if I can explain something clearly with words, it’s totally different to be able to show someone how few steps it takes to get from point A to point B.”

But Harper uses video for more than just explanations.

He knows that every support interaction represents a unique opportunity to connect with a customer, so he’s made custom videos to deliver disappointing news, congratulate customers on achievements, and more.

If you’re wondering whether or not it’s worth the extra effort to use video in your correspondence with customers, take a gander at this small collection of responses that Harper has received:

Thanks Harper, That’s definitely the best customer support response I’ve ever gotten from anyone, ever.

Thanks for the email and video Harper. Most astounded to find the video addressed to me.

Thanks a lot for this info and the quality support. You’ve also inspired me to pick up my game with respect to video answers to support questions.

“The responses are almost always super positive,” explains Harper. “I’ve even gotten a question wrong or missed something, and had a customer still appreciate the fact that I shot a personalized video.”

“I’ve found that I’m much more likely to get a good rating accompanied by a comment when I send videos to people. When we put in the extra effort, they appreciate it and return it,” he says.

Try it out for yourself

If you’re not already making videos for your support tickets, here are some tips for getting up and running:

Learn about our process for creating clear, concise video scripts.