At Wistia, we believe that every business can be more human with video — and we’re no exception to that rule. It may seem obvious, but we really care about video and how it’s made. So, how does an in-house video production team operate at a company that’s all about video? Great question!

I sat down with Dan, our Creative Director, and chatted with him about our process from start to finish, as well as what it takes to help a company succeed with video. Let’s jump in our time machines and take it back to the start.

From background music to creative direction

Like many members of our team, Dan didn’t start his career in tech. “I have a pretty odd background for business, which I think is becoming more common.” Dan is actually a musician by trade, and has been playing music with a band since he was 18.

Along the way, he picked up a bunch of skills that helped serve him not only as a musician, but coincidentally, also as a marketer. From DIY marketing, promotion, and branding, to project planning for the band, Dan was a regular one-man marketing machine. After joining Wistia as a freelance music producer, Dan began to take on even more responsibility, eventually becoming heavily embedded in Wistia’s brand. And before he knew it, he was a full-time employee.

Dan still writes original songs for all of our videos, but now he also serves as the Creative Director for our in-house production team, meeting with the rest of the company to ensure the team is creating videos that accomplish everyone’s goals.

Let’s take a closer look at how our team functions today. We currently have the following roles on our team:

Because we have such a small, close-knit team, it’s easy for members to exchange projects with one another in order to make sure everyone is playing to their specific strengths.

A typical video production team is used to working on predefined, scheduled projects with a fair amount of predictability. At Wistia, however, our team needs to be able to adjust at the drop of a dime. When you’re working in this capacity in-house, there are seemingly endless opportunities for tiny tweaks and minor edits to take place.

According to Dan, it’s honest communication that keeps our production team moving efficiently through multiple projects. We track progress on Trello and use Slack to communicate, but ultimately “ … what keeps us the most in-sync is being near each other and just talking a lot.”

“According to Dan, it’s honest communication that keeps our production team moving efficiently through multiple projects.”

An in-house video production team needs to feel at home in the unpredictable, high-velocity world of tech startups, where the scope of any particular project can change at a moment’s notice. To showcase what that process looks like in action, I talked with Dan about the production of our Soapbox launch video.

Here’s a peek at what it took to bring this video to fruition!

Soapbox, our latest product, is a free Chrome extension that enables anyone to record, edit, and share high-quality videos in minutes. We designed it to show people that they don’t need fancy equipment to express themselves through video.

Ultimately, we wanted to unveil Soapbox with a short and compelling video to excite people about making authentic videos right from their laptops. Here’s what we created:

Work on the launch video began about 2 months before the launch of Soapbox itself (yowza!). From concepting and scripting, to background music and post-production effects, this simple, 1-minute-long video was the product of weeks of work.

The first thing our production team does is assign a team member to be the point person on the project. “You want someone to be in the room with the people who have requested the video,” Dan says, “attending the meetings, understanding the timelines, and representing the creative team.” This is the person who works with the marketing team to determine what the core message of the video should be, and also ensures that we’re aligned with the product team on when the video will be unleashed. For the Soapbox launch video, that person was Chris, one of our video producers.

“The first thing our production team does is assign a team member to be the point person on the project.”

Once the point person has gathered all of the information about what each team wants to get out of the video and on what timeline, the production team gets to work by brainstorming the concept.

How long does that take? “Who knows.” Dan says. “It could take a half hour, if the right magic’s in place, but on a big launch like Soapbox, it usually takes up to 2 or 3 days. On the first day, you get an initial round of ideas. On the second day, you commit to one of the ideas. On the third day, you’re marinating on the idea and trying to poke holes in it. That gives you enough time to pivot or really lock the idea in.”

According to Dan, the key to an effective brainstorm is being proactive about finding out what everyone’s goals are for the video as early as possible.

“If you don’t force that conversation upfront, someone’s going to tell you later that the video needs to meet some goal you didn’t know about. And then you’re going to have to deviate from the original idea you came up with. So it’s really important to take the time in pre-production to make sure you fully understand what’s trying to get accomplished, so you don’t find yourself playing in the wrong sandbox.”

With the idea locked in, the next step is firming up all the logistics. This covers everything from making sure we have the right equipment, to finalizing the script.

“This was one of the first projects where we broke out of the office and went to a bigger studio,” Dan says. At this stage of pre-production, Dan remarks that it’s “ … a lot of emailing, a lot of planning, a lot of looking at calendars, and a lot of reaching out to people.”

When the logistics are settled, the production team then takes the plan back to the other teams for sign-off. These teams are key stakeholders in the production process, so you really need their approval before getting started.

“The product team makes sure we’re talking about the product in the right way from a technical perspective, and the marketing team makes sure that we’re conveying the information in a way that’s consistent with our broader messaging.”

After everyone has given the sign-off, our production team prepares for the shoot. According to Dan, this usually involves taking a day before the shoot to check out all the gear, test things out, and prepare for any logistical surprises on the day of the shoot itself.

Pro-Tip
When emailing about the logistics of the shoot, always overestimate the time it’s going to take to get it all done! Better safe than sorry. 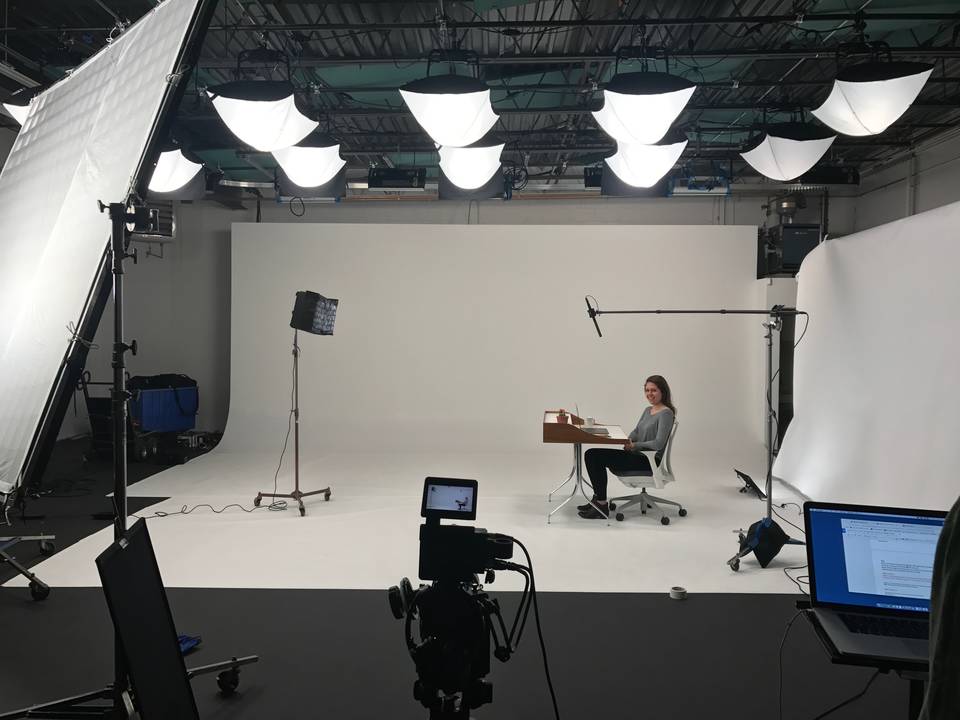 All of the above pre-production steps took about 2 weeks to get squared away. After that, we shot the video, which only took about a day and a half. “This is actually the fastest part,” Dan says, “just because of the nature of how things work. You can’t do it forever — you’re not making a movie.”

Last but not least, our footage is transformed into a final, polished video in post-production.

"One of our video producers will get a pretty close edit together that they feel confident about. Then, they’ll kick it over to me, and I’ll compose a custom song that ties in with the feeling of the video. We then might go back and do one final edit to make sure the music and video are lined up perfectly.”

Our production team usually aims to finish up 2 or 3 days before the requested deadline to make sure they can share the final product with all parties involved. This gives them enough time to make any last-minute changes based on their feedback. “Then you deliver it — and then it’s game over.”

“Our production team usually aims to finish up 2 or 3 days before the requested deadline to make sure they can share the final product with all parties involved.”

Empowering each other with video

Every video we make here at Wistia provides an opportunity for the entire team to work on something fun and creative together. All of the “actors” in our Soapbox launch video are Wistia team members (Hey Dee Dee! What’s up Faris?). With big product launches like with Soapbox, people from across all parts of the business were able to come together to make something truly impactful.

Our in-house production team is the glue that holds us together and makes that magic possible. And as video becomes an increasingly popular medium for marketing, your company might find yourself in need of an in-house video team, so keep this process in mind!

Why and how to form a video team within your company