If you’ve been following us for even just a little while, chances are you’re pretty familiar with the “original” Wistia studio we built right here in our office. It’s where some of our greatest hits were filmed and it holds a special place in all of our hearts. But, like your favorite pair of shoes or that one sweater with the perfectly torn holes at the elbows, we knew we couldn’t stay in that studio forever — we’re growing up and so are our videos.

With Brandwagon and other video series in the works, we needed a place on-site that could meet our growing video needs. We knew the space needed to be adaptable and flexible so that multiple shows could be filmed there while still maintaining their own unique personality and brand. It also had to be easy to use, with lighting and audio set-ups built into the space so it wouldn’t take much time to get up and running. We built our first studio in a way that made it accessible for everyone at Wistia to use, and while this new studio is certainly more sophisticated, we wanted to make sure it also checked off that box.

In the end, after a lot of hard work and many lessons learned, we ended up with a studio we’re super proud of. Read on to get the full scoop and learn some insightful tips from the man who lead the charge himself, our head of video production, Chris Lavigne. 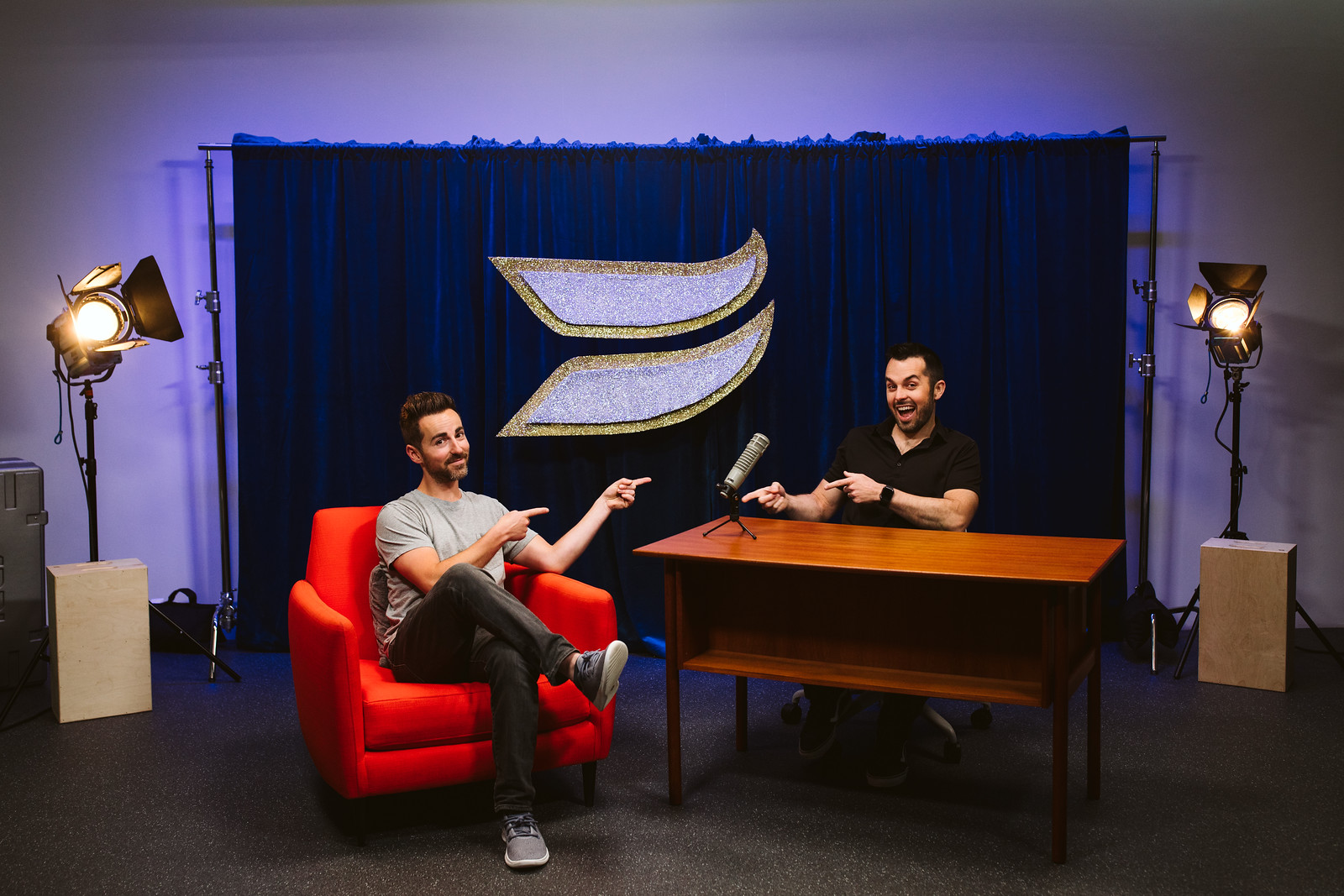 So you built an entirely new studio at Wistia this year. That’s no small task! What was your top priority when building the studio?

Chris: Making the space flexible to accommodate multiple shoots and sets for several shows was crucial. We also wanted to make it so that you could be ready to roll at the drop of a hat. You don’t have to do much to set up for different scenes — the lighting is all controlled by the click of a button. Just flip the switch and it all looks good enough to shoot. You don’t have to worry about setting up lights or camera locations either — all that stuff is predetermined.

Of course, it varies a bit from show to show, depending on what we’re shooting that day. There might be a little bit of extra set-up time required to move the cameras to the right locations and get the props in the right spots, but all that stuff is gaff-tapped out on the floor. So, you basically just find the gaff tape spot, put the props down, and you’re ready to go.

This approach is important when you’re shooting something episodic, and especially if you’re shooting multiple shows at the same time. On Monday, you might be shooting an episode for one show, like Brandwagon, and then you’ll pop back into the studio to shoot other videos over the course of the week. You’re going to want everything to look the same when it’s time to shoot Brandwagon again, for example, and our studio is set up to work well for that.

The new studio feels pretty “grown-up” compared to the original Wistia video studio. What would you say is the biggest difference between the two?

Chris: There are actually more similarities than differences between our two studios. The biggest similarity is that it’s a room that was never meant to be a studio that we retrofitted in a scrappy way, turning it into a studio. The biggest difference is the lighting grid. This is the first time we’ve had a lighting grid that is pre-programmed and controlled from one central location so you don’t have to set up the lights every time you go to shoot.

“This is the first time we’ve had a lighting grid that is pre-programmed and controlled from one central location so you don’t have to set up the lights every time you go to shoot.”

Building and designing a studio from scratch doesn’t sound easy. What do you think was the most challenging aspect of the process?

Chris: The most challenging part of the entire studio build-out, believe it or not, was finding the right chairs for the VHS set — which, by the way, was made using all real VHS tapes. We had a specific vision for those chairs that Chris Savage and the featured guest sit on. We started looking maybe three or four weeks before our first guest was booked. We went to a bunch of places and couldn’t find the right ones. We wanted them to be simple and have a mid-century, modern feel. We went to so many different furniture shops and they were either really poor quality or really nice chairs that we wouldn’t have been able to get for weeks because they were custom.

We were down to the wire. It was a couple of days before our first interview and we still didn’t have chairs! I went home and saw these chairs that my wife had ordered from West Elm. I looked at them and was just like, “ … these are the chairs.” They were staring at me the whole time! So we ended up stealing those chairs. My wife was not super happy to come home to an empty living room, but it ended up working out for the best! 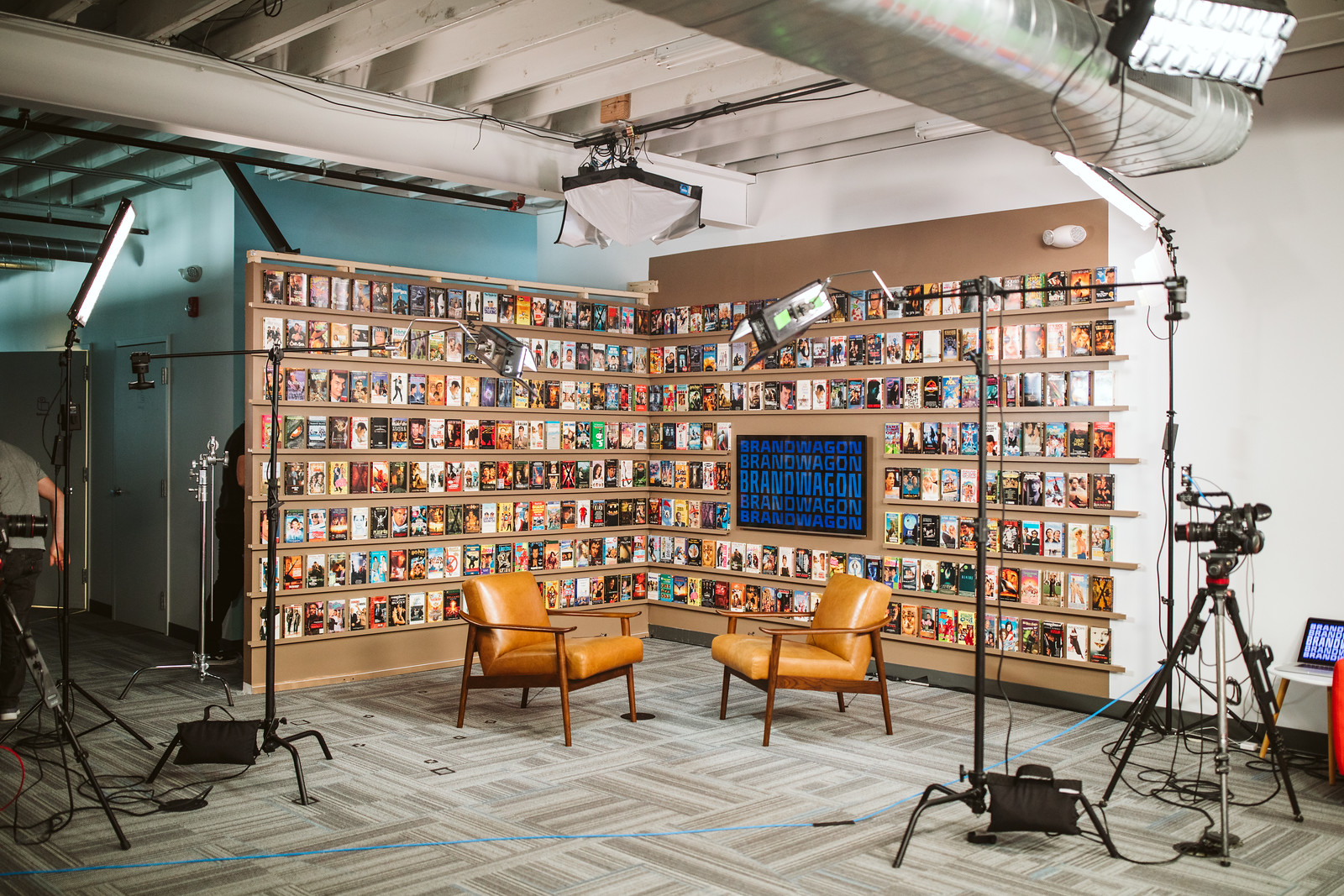 We all know one of the most important aspects of a successful shoot is making sure you have a good audio setup. What was did that process look like at this studio?

Chris: This was a huge hurdle to overcome after we built the set. At the end of the day, we’re shooting videos in a room that was never intended to be a studio. It’s on the second floor of a building, it had really squeaky floors that we had fixed by getting a contractor to come in and tighten up the joints, and being on the second floor means we have tenants below us that can hear everything we do. So we have to be really considerate of that every day.

Another difficult thing about being on the second floor is that the roof is right above us, and there’s very little to no insulation. So when it rains, or there’s a helicopter or a plane that goes by, we can’t shoot. Plus, there are conference rooms on our floor that people use during the day! So if anyone comes over for a meeting or something and opens the door, it pretty much ruins the shot. In post-production we use a plugin called iZotope, which helps reduce room noise, echo, the HVAC, you name it. It lets us focus the sound a little bit, which is really helpful.

But the biggest audio problem we’ve run into so far is with our mics. We bought wireless lavalier mics, but there are really strange frequency issues with the building that have rendered those mics useless, which means we had to settle for wired mics. As a result, all our guests have to be tethered to their chairs when they’re being interviewed. If they need to go to the bathroom or something, we have to un-mic them and then get them all set up again when they’re back.

What advice do you have for people wanting to build their own studio for a video series?

Chris: The biggest piece of advice would be to make sure you have one area of the studio that gives you total flexibility over what you can shoot there. In this studio, we have two places where we can shoot: the VHS set and the set that has the curtain and sparkly logo you may have seen in Brandwagon.

When you think about shows like The Tonight Show, there’s really only one show on that particular set. When you look at the VHS set we built … you don’t really want to see a multiple shows shot there with the same backdrop. So the key to our studio being super versatile is having a blank canvas to work with. We call ours the flex space or the “homebase side” of the studio — it’s just a part of the room with a blank wall and an empty floor. It’s super easy to bring in different props and change the lighting there to meet the vibe of a totally different show.

“The biggest piece of advice would be to make sure you have one area of the studio that gives you total flexibility over what you can shoot there.”

There you have it! When we came up with the idea for Brandwagon, we knew we wanted to have a studio that felt unique and would reinforce the brand we created for the show. We didn’t know exactly what it would take to get there, but we’re super excited about where we landed with the new studio.

If you find yourself wanting to make a video series but don’t have a “proper” studio, don’t let that stop you! With a little bit of creativity and some production know-how, you’ll be well on your way to creating a unique, viable set for your next video series.

Already have a studio of your own? How did you go about getting it all setup? Share your story with us know in the comments!

Announcing Change the Channel: A Live Event from Wistia HQ!

Join us on October 2 at 1 p.m. EST for Change the Channel — a special live broadcast hosted by Wistia’s co-founders. They’ll share where they see marketing heading and what you can expect from Wistia in the coming years.