When you’re building a landing page, the placement of the call-to-action is one of the most important considerations, with a direct impact on the page’s conversion rate.

Likewise, if you’re using video in your sales funnel, the position (and size) of your embed should be carefully chosen to optimize the video’s play rate.

With data from thousands of Wistia videos embedded on pages, we decided to determine (as best we could) the optimal position and size for a video to get the most plays. Let’s dig in!

We began by crawling a set of 95,000 pages where Wistia-hosted videos are embedded. We collected data on the position of each video relative to the top of the page. We carefully selected videos that were not autoplaying or using a popover embed. We also removed any outliers in terms of number of loads to try to keep the selection as normalized as possible.

Once we collected the data, we turned each page into 7 zones (each 250 pixels high). Then we determined which zone the play button of each video fell into. For example, the first video in the image below falls into Zone 2.

We see a large drop off in play rate between zones 3 and 4, which is most likely due to the play button being below the fold. For most screens, zones 1 and 2 are above the fold, but zone 3 is only above the fold for a portion of those screens (depending on the site’s metrics and the screen size). Zones 4 through 7 are consistently below the fold, and the videos placed there pay the play rate price. 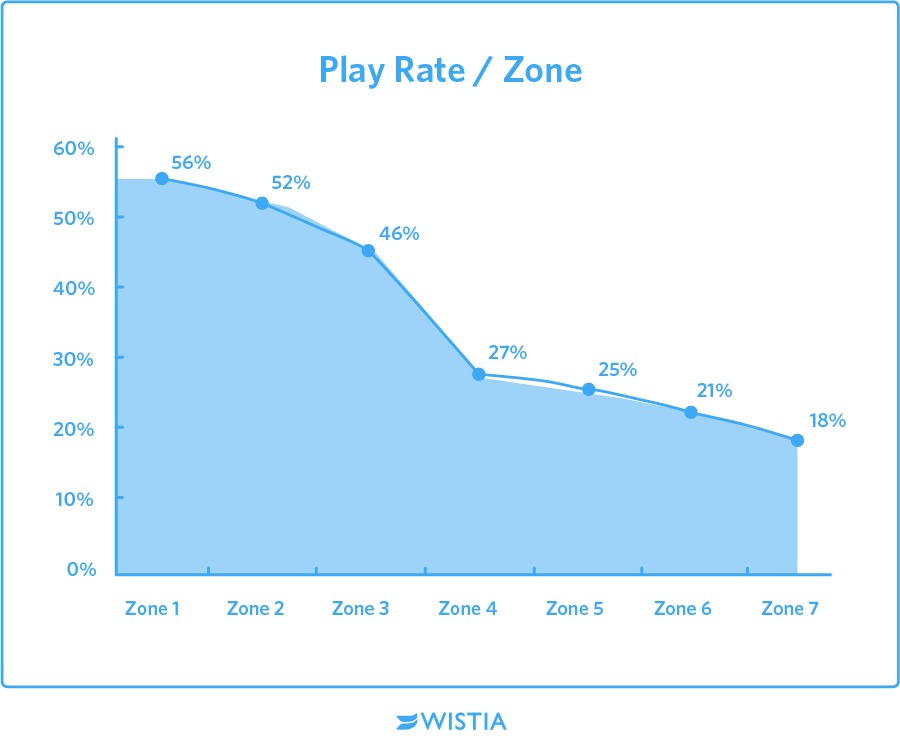 At Wistia, we’ve found that visitors who engage with a video are substantially more likely to sign up for a hosting plan than those who don’t.

We try to position our videos in key locations on a given page, to remove barriers to pressing play for visitors who are ready to watch a video.

If you are using video to increase your conversion rate, consider placing the player above the fold for the largest impact.

The dimensions of a video embed also have an important influence on play rate. We’ve all seen those websites that place a video in a small right-hand column below the fold. In some cases, the play button is as big as the thumbnail. How many plays do you think those videos have?

Using the aforementioned data set, we attempted to determine the effect of video size on play rate. It turns out that there is a sweet spot for video width — between 401 pixels and 600 pixels. Videos of that size have the highest average play rate.

A video with a width between 401 pixels and 600 pixels doesn’t overwhelm a page, but it’s still large enough to entice users to engage. The slight bump you see on larger videos (greater than 1200 pixels wide) is from fullscreen videos, which leave the visitor with little choice but to press play.

When looking at video height, we see a similar trend, which is good since video width and height are tied so closely together.

Make it easy to press play

While there is no silver bullet for improving your video’s play rate, you can make it easier for users to engage with some simple adjustments. Making sure that your play button is above the fold and choosing the right size for your embed are great starting points. So experiment, test out our findings, and let us know how it goes. Happy optimizing!